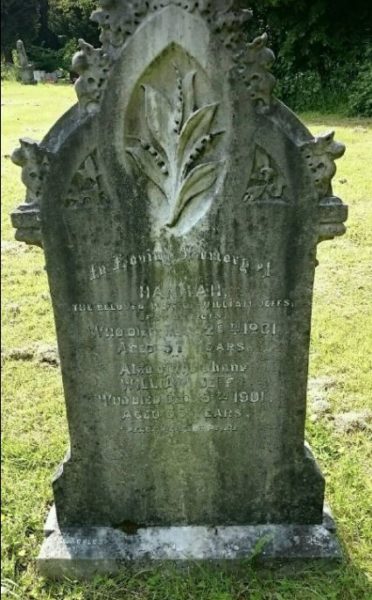 William married Hannah GUY on 27 April 1867 at St George’s Chapel Shrewsbury. At the time of the census in 1871 they were living in Gateshead, Co. Durham. By the census of 1881 they had moved back to Shropshire living at New St St Georges where they lived until before the 1901 census. In 1901 William and Hannah had moved to  Chapel St St Georges. Hannah died aged 57 on 29 May 1901 and William died 7 months later on 5 December 1901 both in St Georges aged 55 and they were buried at St Georges Church as shown on headstone.

William and Hannah JEFFS had the following children:

Children of William and Hannah Jeffs

Thomas Edward JEFFS was born in 1868 in Oakengates, Shropshire.

He married Margaret Ann TROTTER on 26 April 1897 at St Peter’s Church Redcar, Yorkshire. He and Margaret moved to 2 Stratford Terrace Hunslet he was working as a Rolling Mill Manager. He died in 1904 in Hunslet aged 38.

Thomas and Margaret JEFFS had the following child:

Sarah and William JEFFS were twins born in early party of 1871 and sadly died when only a few weeks old.

Ellen JEFFS was born on 17 November 1875 in Gateshead.  Ellen married Horatio PRICE on 23 December 1896 at St Georges Church. At the time of the census in 1901 they were living at 123 New St St Georges, Horatio was an assistant Grocer in his father’s shop. Horatio died 1910 leaving Ellen working as a Baker at 123 New St St Georges. Ellen was still at 123 New St in the Identity Card Register of 1939 recorded as a Retail Grocer. Ellen died in 1960 in St Georges aged 84.

Horatio and Ellen PRICE had the following children:

John JEFFS was born 13 December 1879 in St Georges and died in 1957 in Wellington, Shropshire. John married Florence Edith DUNKEY in 1899. At the time of 1911 Census John was living at 1 Potters Bank, Ketley with his children, working as a Roll Turner, although listed as married, Florence wasn’t on the census. Florence died in early 1919 in Shrewsbury.

John and Florence JEFFS had the following children: 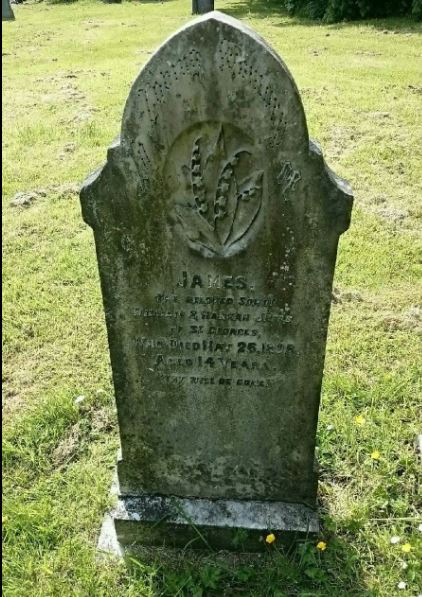 Grandchildren of William and Hannah Jeffs

Clara Elva PRICE, daughter of Horatio PRICE and Ellen JEFFS, was born in 1897 in St Georges.

Lily JEFFS, daughter of John JEFFS and Florence DUNKEY and twin sister of Harry, was born 25 September 1899 in St Georges. Lily died in 1967 having never married.

Harry JEFFS, son of John JEFFS and Florence DUNKEY and twin brother of Lily, was born 25 September 1899 in St Georges. Harry lied about his aged when he joined the KSLI in 1915 and was dismissed from the army when his age was discovered, by then he had seen action in France. Harry subsequently re-joined the army in late 1916 and joined the Royal Artillery, when again he was posted to France, where he was mortally wounded and died from his injuries on 7 May 1917 near Gorre France. Harry is buried at Gorre British and Indian Cemetery which north west of Lens France.

Ida JEFFS, daughter of John JEFFS and Florence DUNKEY was born in 1906 in Oakengates, in the 1939 Identity Register she was listed as a patient in Shelton Hospital Shrewsbury. Ida died in 1958 in Shrewsbury aged 51.

Thomas JEFFS, son of John JEFFS and Florence DUNKEY was born in 1908 in Oakengates.

The reason for the search for descendants is due to St Georges Church planning to relocate 7 headstones away from the spot marking the graves and to put against a wall elsewhere in the churchyard in order to create a communal area for events, which a number of local people are finding distasteful.

Headstones no longer under threat of relocation, few minor amendments