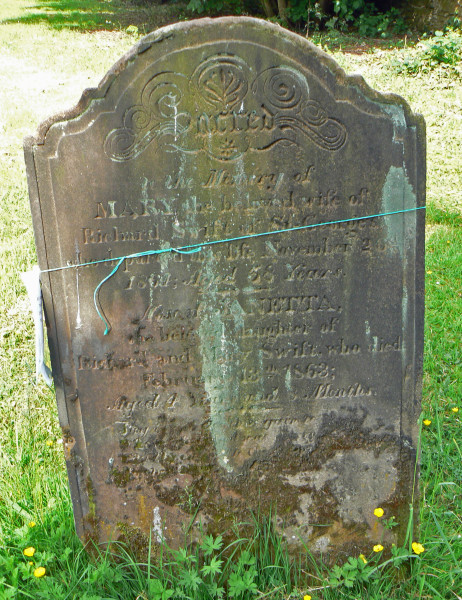 The census in 1851 showed he was living at 36 Forge Row and working as a Puddler. Richard married Mary PACE at St Martin’s Church, Tipton Staffordshire on 3 July 1853. By the census 1861 the family had moved to West St, St Georges, however in November 1864 Mary died, aged 38 and was buried in St Georges Church as noted on headstone.

Richard married Esther MARTIN on 2 June 1866 in Lilleshall, Shropshire. Between 1871 and his death in June 1886 Richard, Esther and family lived in New St St Georges. He was buried on 24 June 1886 at St Georges Church.

Richard Swift was a member of the Court of “British Workmen”, Ancient Order of Forresters, many of who attended who attended his funeral at the church.

Esther SWIFT died in December 1883 and was buried at St George’s  Church on 31 December.

Richard and Mary SWIFT had the following 3 children:

Richard and his second wife Esther SWIFT had the following children:

Children of Richard and Mary Swift

John SWIFT was born in October 1856 and died a few weeks later and was buried at St George’s Church on 23 November.

Children of Richard and Esther Swift

John Thomas SWIFT was born in 1867 in St Georges and in the 1881 census he was working as a Grocer’s Assistant in St Georges.

He is believed to have married Maria DAVIES Q3 1887 in Wellington, Shropshire. By the time of the 1901 census he was a Baker in Walsall, Staffordshire.

John and Maria SWIFT had the following children:

Janetta SWIFT, daughter of Richard SWIFT and Esther MARTIN, was born on 18 January 1869 in St Georges and was baptised on 14 February 1869 at St Georges Church. Janetta married Charles KEYWORTH in 1895 in Lincoln. By the time of the 1939 Identity Register they were living at 3 Railway St. Janetta died in 1941 in Bath aged 72.

Following the death of Janetta in 1941, Charles married Violet Rose SWIFT, Janetta’s sister, in 1942 in Bath. Charles died 1954 in Bath.

Charles and Janetta KENWORTHY had the following children:

Mary Elizabeth SWIFT was born in February 1871 in St Georges. She married John William SHOTTON on 25 December 1897 in Lilleshall. Following their marriage they moved to Rugby where she died in 1937.

Charles and Mary Elizabeth SHOTTON had the following children:

Joseph William Amos SWIFT was born on 3 July 1873 and was baptised on 19 August 1873 at the Wesleyan Methodist Chapel, The Nabb. Joseph married Ellen Annie CROSS in 1897 in Kings Norton, Worcestershire. At the time the 1939 Register was taken he was a Retired Master Baker living at Lyndhurst in Highley, Shropshire. Joseph died on 16 July 1956 in Bridgnorth.

Joseph William Amos and Ellen SWIFT had the following children:

Esther Annie SWIFT was born on 3 September 1875 and baptised on 28 September 1875 at the Wesleyan Methodist Chapel, The Nabb. Esther married Horace Pryce HERBERT in 1901 in Wellington Shropshire by the time of 1911 Census they had moved to Blackburn Lancashire.

Grandchildren of Richard and Esther Swift

Robert Blackford KEYWORTH was born on 5 February 1907 in Lincoln, he married Margaret Gladys DANDO in 1936 in Bath Somerset.

Gladys Elizabeth SHOTTON, was born on 24 March 1899 in Rugby, Warwickshire. She married James CURTIS in 1929 in Rugby and is believed to have died in 1986 in Stevenage, Hertfordshire.

Julia Annie SHOTTON was born on 2 September 1900 in Rugby. She married Frederick D COLLINS in 1936 in Rugby and was believed to have died in 1986 in Newport, Monmouthshire.

Frederick D COLLINS was born on 11 October 1883 and died in 1953 in Newport  Monmouthshire.

Clarence Amos SWIFT  was born on 16 June 1897 in West Bromwich, Staffordshire and was baptised on 7 July 1897 at St Philip’s Church West Bromwich.

Evelyn Clara SWIFT was born on 18 August 1901 in Brierley Hill, Staffordshire and married Ambrose GOFF in 1939 in Bridgnorth, Shropshire. Evelyn died in 1983 in Shrewsbury, Shropshire.

Horace Leonard Grant HERBERT was born in 1901 in Trench Shropshire, died in 1922 in Blackburn Lancashire.

Arthur Eric HERBERT was born in 1905 in Trench Shropshire, he also died in 1922 in Blackburn, its not known whether 2 deaths are connected as both Arthur & Herbert died in the same quarter of 1922.

Maud Lilian HERBERT was born on 31 March 1908 in Blackburn Lancashire. Maud married Edwin Anderson in 1932 in Blackburn. Maud died in 1992, Edwin two years earlier in 1990, both in Blackburn.