The new additions span the years 1784-1939 and include registers of inmates from infamous prisons including Pentonville, Wormwood Scrubs, Millbank and Newgate as well as governor’s journals, trial records, lists of visitors, men in solitary confinement, baptisms at women’s prisons and more.

The full list of series added in this latest update includes;

Also included are over 1000 new mugshots taken at Pentonville in 1876. To explore original mugshots, search the MEPO 6, PCOM 2 and PCOM 4 series. 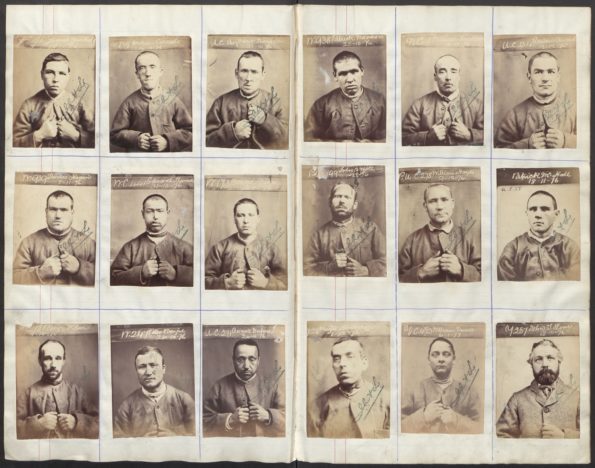 Spanning 165 years of the British Justice system, they reveal many ordinary and extraordinary stories of criminals, victims and law enforcers from the Georgian highway robber, the Victorian murderer and the Edwardian thief, to the common rural poacher, unemployed petty food thief and the early trade unionist.

Researchers will find physical descriptions, photographs, whether their ancestor was executed or transported, details of their offence, sentencing, imprisonment and official correspondence about their case.

The full Crime, Prisons and Punishment 1770 – 1935 collection includes 22 series from the National Archives at Kew, recording the intimate details of millions of victims and villains, beginning with judges’ recommendations for or against pardons, petitions through which criminals and their families could offer mitigating circumstances and grounds for mercy, and later, licenses containing everything from previous convictions to the state of a prisoner’s health.

These latest additions have also been added to Findmypast’s browsable collection, allowing you to delve through the original documents page-by-page.

Unearthed using this week’s new crime records, Findmypast have also added hundreds of baptisms and burials that took place in Westminster Penitentiary to their collection of Westminster Parish records.

An 1823 burial register from Westminster Penitentiary. View the full record.

Most of the new prison baptisms are for adult inmates, although some do record the details of children born to female prisoners or staff.

Two new publications join the Findmypast Archive this week along with substantial updates to six existing titles. Online for the first time are:

While thousands of pages have been added to: