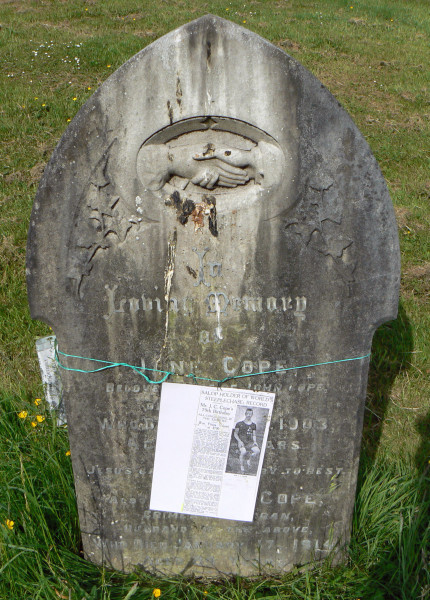 We are seeking descendants of John COPE, son of John and Mary COPE, was born in 1828 in Coalpit Bank, Shropshire, now known as Ketley Bank. He was baptised on 14 September 1828 at Holy Trinity Church Dawley, Shropshire.

John joined the Army on 23 September 1851 and was posted to the Coldstream Guards as a Private. He was posted to the Crimea serving in Alma, Inkerman and Sevastopol between 1854 and 1855 and was severely wounded in the neck and shoulder by a musket ball on 19 August 1855 at the during minor action at during the siege of Sevastopol. Florence Nightingale wrote to Jane about his condition and recovery as it she who nursed him back to health. In his son’s obituary this letter was mentioned as treasured family possession.

From the time of the 1861 census until 1891 John and Jane lived in Oakengates, with John working as a Labourer in the Ironworks, possible type of work being restricted due to his war wound.

By the time of the in 1891 John, Jane and their children had moved to New St, St Georges, still a Labourer in Ironworks. The census in 1901 shows John  and Jane still living in New St, but now living on his own means, most likely his army pension.

In the 1911 census he is living at 89 Industry Rd Darnall, Sheffield, Yorkshire aged 83, the home of his daughter Edith and her family, he is noted as being an Army Pensioner. He died on 17 January 1914 aged 86, although headstone has 84, at the home of his daughter Edith in Glasgow.  John Cope was buried with military honours at St Georges Church with the inscription “Crimean War Veteran”.

John and Jane COPE had 4 children:

Children of John and Jane Cope

John Crimea COPE was born in 1857 in Coalpit Bank, Shropshire and baptised on 4 October 1857 in Wombridge, Shropshire.

John died on 19 February 1939 at his home in Freeston Avenue Priorslee Shropshire aged 81, he was buried at St Georges Church on 23 February.

Thomas Alfred COPE was born in 1859 in Coalpit Bank and baptised on 2 October 1859 in Wombridge Shropshire. Thomas died in Springs, Transvaal, South Africa on 31 July 1907 leaving a wife and 3 children.

Peter Ernest COPE was born in 1863 in Coalpit Bank. Shropshire, also known as Ernest Peter COPE. Peter was a boilermaker he joined the Boilermakers Trade Union in 1890, in the 1901 census he was working in Middlesbrough, however by the 1911 Census he had moved to Sheffield. Peter was also a noted cyclist.

Edith Ellen COPE was born on 19 December 1866 in Coalpit Bank.

Edith married John Birch NEESHAM in 1885 in Wellington. By the time of the census in 1911 they were living at 89 Industry Road Darnall, Sheffield, Yorkshire.

By the time the 1939 register was taken on 29 September 1939 Edith, now a widow, was living at 17 Stradbroke Ave Sheffield, Yorkshire with her son Frederick. Edith died in Glasgow in 1951.

Grandchildren of John and Jane Cope

Alexander Crimea Cope TONKS was born in late 1890, before John Crimea Cope and Mary Jane Tonks were married circa in St Georges, Shropshire. Alexander died in early 1967 with his death being registered in Wellington.

Alfred COPE was born in 1892 in St Georges Shropshire. In the 1911 Census Alfred is a Gunner in the Royal Field artillery stationed in Farnborough  Hampshire.

Lilian married Frederick JONES in 1929 and by the time the 1939 Register was taken on 29 September 1939 they were living at 6 Freeston Avenue Priorslee, Shropshire. Lilian died in 1982 in Hillingdon, Middlesex.

Frederick and Lilian Maud Alison COPE had the following child:

Sarah Ethel NEESHAM was born in 1885 in St Georges. She married William KIRK on 27 September 1910 in Attercliffe, Yorkshire and died in December 1911 in Sheffield, Yorkshire aged 26. She was buried on 26 December 1911 at the Park Municipal Cemetery, Tinsley, Sheffield Yorkshire.

Sylvia Alison JONES was born on 10 September 1929 in Wellington, Shropshire. She married Donald John MITTON in 1950 in Wellington and died in 2005 in Hillingdon, Middlesex.