Story behind the Headstone 2

Story behind the Headstone 2 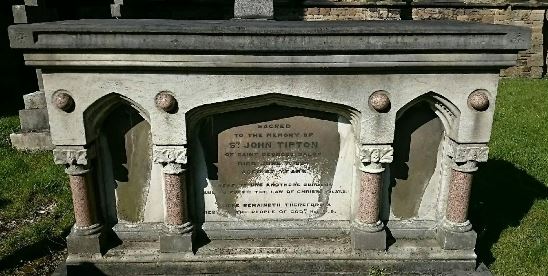 The tomb of St John Tipton is quite prominent on the left side of the entrance to the church. Who was this man who had such a fine monument to his memory?

St John Tipton was born in 1826 in Priorslee Shropshire, son of Luke and Elizabeth Tipton. St John was baptised at the Chapelry of Priorslee in the parish of Shifnal, a building which no longer exists, the chapel being replaced by St Peter’s Church in 1836.

At the time of the 1841 & 1851 censuses St John was living with his widowed father, who was Coal Agent at the Ironworks, and siblings Ann, Elizabeth and Edward in Priorslee.

By the time of the 1861 census St John had now started his own business as a Grocer in Stafford St, St Georges, near the Elephant & Castle. He employed 3 men, a William Simms, who was born in Washington USA, Thomas Edwards from Newport and George Kearn from Montgomeryshire.  He ran his Grocer’s business in St Georges for the next 30 years until his death on 7 June 1894. 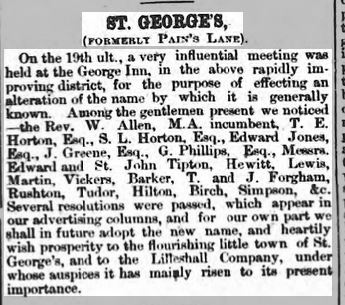 St John Tipton was amongst those present at the meeting at the George Inn on 19 December 1859 at which the name of the village was changed from Pain’s Lane to St George’s as reported in the Wellington Journal on 7 January 1860.

St John Tipton was also present at the first Vestry Meeting of the new Parish of St George’s, formed from parts of Lilleshall, Shifnal and Wrockwardine Wood. He was recorded as proposing S L Horton as one of the church wardens of the new parish.

The Indian Famine Relief collection in 1861 was overseen by St John Tipton who was responsible for receiving donations from the people of St George’s.

From these small snippets of information St John Tipton was a well respected businessman, involved in the church and well respected by the people of the village of St George’s.